Click here to choose Freedom for All Americans as a recipient on Amazon Smile – when you shop, Amazon donates.
Visit Amazon & Support FFAA
CONNECT 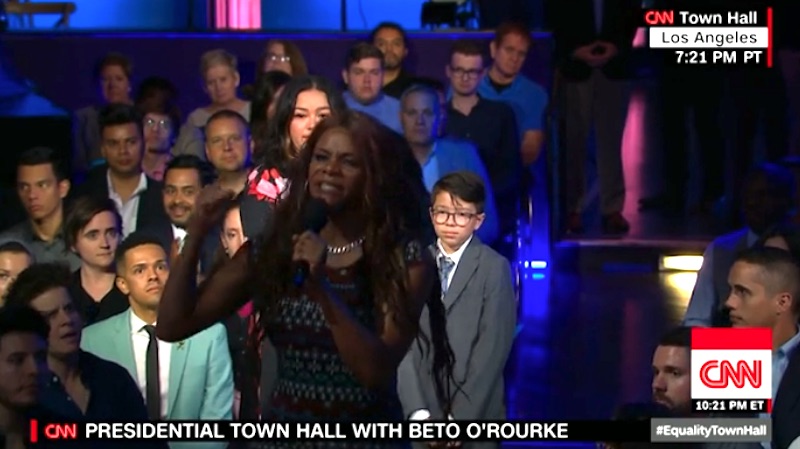 Nine Democrats seeking their party’s presidential nomination for 2020 tried to make their strongest pitch to LGBTQ voters at CNN and the Human Rights Campaign’s “Power of Our Pride” town hall on Thursday night.

But throughout the night, they were forced to share the spotlight with protesters in the audience calling for awareness and action around the issue of black transgender woman who have been murdered in the United States. Already this year, more than 20 transgender women, most of whom are women of color, have been killed, with several dozen others having been killed in recent years. Given current trends, 2019 is on pace to meet or exceed the number of trans individuals — 26 — killed in 2018.

One of the protesters, actress and activist Blossom C. Brown, took the mic during former U.S. Rep. Beto O’Rourke’s allotted time to call out the Human Rights Campaign, which co-sponsored the forum, for not having a black transgender person — man or woman — ask a question of one of the political candidates. (A few transgender men and women appeared as questioners later in the night.) In an exchange with moderator Don Lemon, Brown declared that black trans women were being killed, and accused CNN of “erasing” the community.

“Black trans women are dying,” Brown said. “Our lives matter. I am an extraordinary black trans woman, and I deserve to be here.”

Other protests occurred when protesters placed a transgender flag in front of the camera and yelled out “Trans lives matter! Black lives matter!” while South Bend Mayor Pete Buttigieg was on stage, and when a person up in the gallery called out about transgender deaths while U.S. Sen. Kamala Harris was speaking, with the California senator gently responding, “I know. … I know.”

Individual candidates experienced highs and lows throughout the night as they attempted to broach issues like how they’d combat workplace discrimination, their view on religious exemptions for those wishing not to serve LGBTQ individuals or same-sex couples, whether they supported the decriminalization of sex work, and their opposition to laws that criminalize people living with HIV.

Both Buttigieg and U.S. Sen. Cory Booker (D-N.J.) fielded questions about religious justifications for discrimination, addressing their own religious beliefs and casting such justifications as an affront to their faith. During his time on stage, Buttigieg said that using faith to condone anti-LGBTQ discrimination “makes God smaller,” adding that his Christian faith instructs him to identify with the marginalized and show them love.

“Religious liberty is an important principle in this country, and we honor that,” he said. “It’s the case that any freedom that we honor in this country has limits when it comes to harming other people.

“I have to say, when religion is used in that way, to me, it makes God smaller,” Buttigieg added. “It, to me, is an insult not only to us as LGBTQ people, but I think it’s an insult to faith to believe that it could be used to hurt people in that way.”

“It says in Micah, ‘Lord, what do you want from your people?’ which is to ‘do justice, love kindness, and walk humbly,’ Booker said, referring to a Biblical passage. “…We need to have laws in this country — and this is why the Equality Act is one of them — that put parameters that do not allow people to discriminate.” 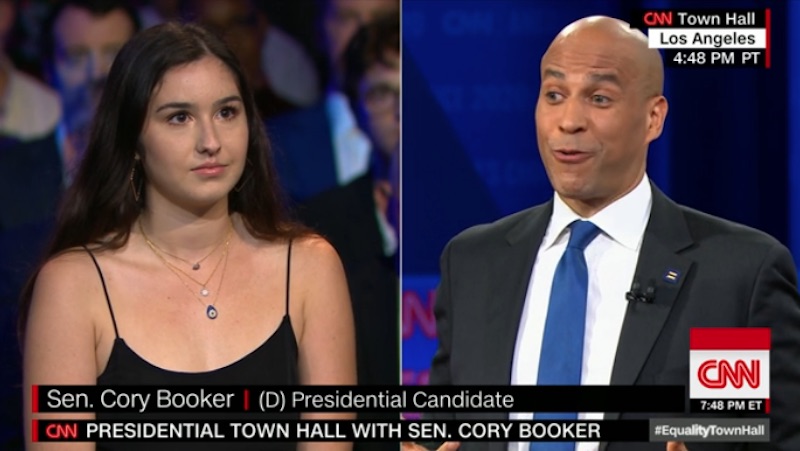 U.S. Sen. Cory Booker answers a question from an audience member at the “Power of Our Pride” town hall – Photo: CNN.

Booker also called for the United States to speak out more forcefully against anti-LGBTQ human rights abuses in other countries, saying religion or cultural norms were not reason enough to look the other way. That answer was echoed by former Vice President Joe Biden, who promised to “curtail aid” to nations, including U.S. allies like Saudi Arabia — which he remarked had “little redeeming social value” — that criminalize homosexuality and trample on human rights; Sen. Elizabeth Warren (D-Mass.), who talked of the need for holding the United States’ trade partners accountable and forcing them to meet certain human rights standards, just as it would make similar demands on labor or environmental issues; and former Housing Secretary Julián Castro, who called for the United States to amend its asylum policies to allow LGBTQ people who are persecuted in their home countries to seek protection.

There were some lighthearted moments interspersed in the debate, including when Warren, whose answer elicited cheers from the audience, was asked about what she would say to a person who claims they believe that marriage is “between one man and one woman.”

Then, after a pause, she added. “Assuming you can find one.” The audience at The Novo Center in Los Angeles roared with laughter.

Nearly all the candidates expressed some support for the Equality Act, with many casting it as not only necessary, but the needed remedy to ensure LGBTQ equality should the U.S. Supreme Court, in two cases currently before it, decide that Title VII of the Civil Rights Act does not protect LGBTQ people from workplace discrimination.

They also reiterated their support for marriage equality, with many comparing the progress on marriage and the wider society’s acceptance of it to the lack of progress on nondiscrimination protections. At one point, Joe Biden, asked about his evolution on marriage — most notably, his endorsement of marriage equality before President Obama was ready to come out in favor of it — said that the former president had been aware of his position, which, according to Biden, that he would not say he supported marriage equality unless directly asked. After Biden’s announcement, despite all the political pundits saying that Biden would be in trouble, the former vice president said Obama told him, “Well, you told me,” embraced him, and gave him a peck on the cheek. 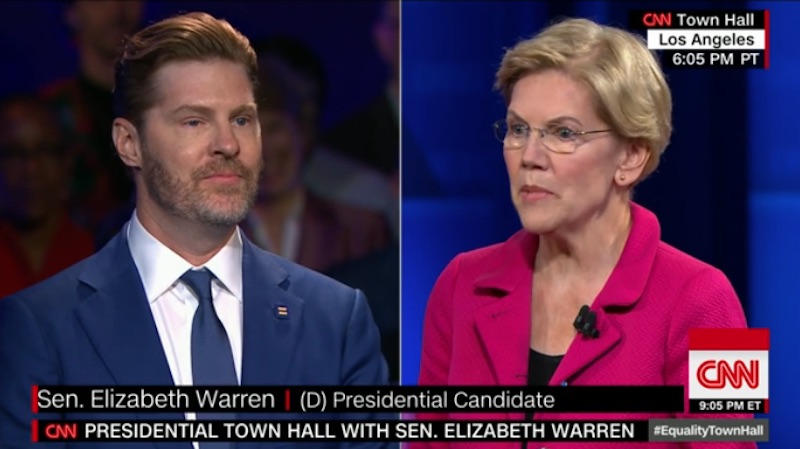 Several of the candidates came out against laws that criminalize people with HIV by making it a crime not to disclose their status, even if they’re in treatment and undetectable, meaning the virus is almost impossible to spread. They also railed against pharmaceutical companies for keeping the price of HIV medications, like Truvada, which is used for pre-exposure prophylaxis, artificially high.

California businessman Tom Steyer pointed to the influence of the pharmaceutical lobby as a form of corruption, while Beto O’Rourke said he’d try to negotiate with pharmaceutical companies to make Truvada more affordable, and, if they refused, he vowed his administration would “take over that patent,” a reference to eminent domain. Pete Buttigieg, one of three who released a comprehensive plan for LGBTQ equality just hours prior to the town hall, has outlined a similar tactic of using eminent domain to acquire patents on potentially life-saving drugs.

U.S. Sen. Amy Klobuchar (D-Minn.) was asked whether she supported legalization of sex work by an audience member who alleged that provisions under SESTA/FOSTA, an anti-human trafficking bill she had supported, had effectively forced online escort websites to close down — thus inadvertently making it more dangerous for transgender sex workers to conduct business by taking away their ability to vet clients.

In response, Klobuchar said she did not support legalization of sex work or full decriminalization, noting that such moves might give protection to human traffickers and put women engaging in sex work at risk. She did say she was proud of a provision in SESTA/FOSTA that allows for “safe harbor” for sex workers, and offered to meet with the questioner after the forum to discuss where they could find common ground in protecting sex workers and not criminalizing them.

Castro, as the former Secretary of Housing and Urban Development, made news when he called on HUD Secretary Ben Carson to for offensive comments that disparaged transgender individuals, calling Carson’s comments “shameful.”

O’Rourke, who in a previous debate raised eyebrows when he openly endorsed confiscation of assault weapons — saying, “Hell, yes, we’re going to take your AR-15, your AK-47” — again grabbed attention when he touched a so-called “third rail” of politics by advocating that religious institutions that oppose same-sex marriage should lose their tax-exempt status.

“There can be no reward, no benefit, no tax break for anyone or any institution, any organization in America that denies the full human rights or the full civil rights of every single one of us,” O’Rourke said. “And so as president, we are going to make that a priority and we are going to stop those who are infringing upon the human rights of our fellow Americans.”

Earlier in the town hall, Booker was asked a similar question about churches’ tax-exempt status, but dodged it. 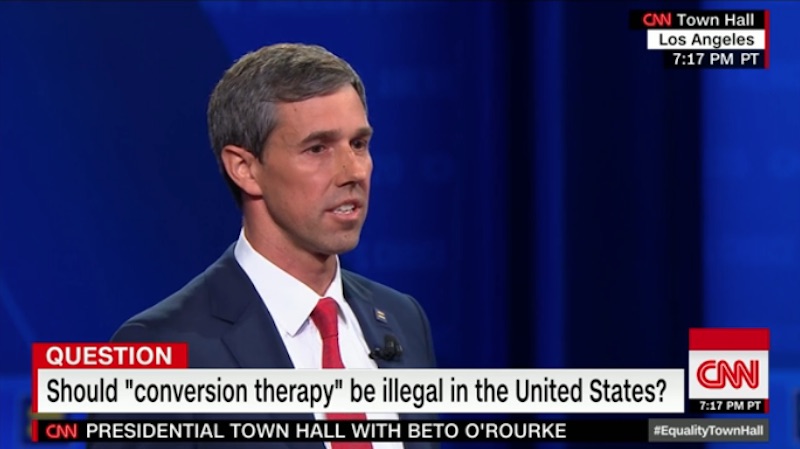 O’Rourke forcefully denounced the practice of conversion therapy, which he said should be illegal and was “tantamount to torture — a torture that we’re visiting on children who are absolutely defenseless.”

All of the current Democratic candidates seeking the presidency have come out against the practice, which seeks to use aversion therapy to change a person’s sexual orientation or gender identity, or at least alter their behavior by giving them tools to resist acting on same-sex attraction or gender dysphoria.

O’Rourke also took aim at the myth of the transgender predator — a narrative, often spread by anti-LGBTQ groups, that transgender people pose a threat to others if they use restrooms matching their gender identity, adding: “We should all recognize that transgender children are more often the recipient of violence than they are the perpetrators.”

Kasey Suffredini, the executive director of Freedom for All Americans, praised all nine candidates for speaking “personally and really passionately about LGBTQ people as human beings, friends, neighbors, co-workers” and emphasizing the passage of pro-equality measures as “the right thing to do.”

“Pretty much every candidate on the stage was able to talk about the work they’ve done supporting the community going back decades,” he said. “These are all folks who are tested for the most part.”

However, Suffredini did note that there were high and low points, sometimes in the same segment. For example, Kamala Harris offered her pronouns as “she/her/hers” when she came onto stage, but CNN host Chris Cuomo, apparently unaware of the importance of pronouns, joked, “Mine, too.”

“It totally encapsulated the gulf of education there is, even among people who support the community,” Suffredini said of the incident — for which Cuomo has since apologized.

“There were no dark moments where anybody really came off as ‘they don’t know anything about the community, they don’t have a grasp of the issues,’” Suffredini said of the candidates’ performances. “I think what was more different between the candidate was stylistic differences. “I was overall impressed with everybody.

“They all stood out for being very culturally competent and comfortable, and what that afforded us was to see the differences that they each offer, and the way that they would approach things,” he added. “So Amy Klobuchar talked not only about the moral case for protecting LGBTQ people from discrimination, but she said, ‘Look, in the Midwest, I also make the economic case, because that’s how you reach Americans near where I live,’ making the case that Americans have different perspectives on different issues and you need to reach them on the things they care most about.”

Suffredini — who is not endorsing any candidate at this time — also had praise for Booker for being the first candidate to take the stage.

“He really set the table very early in one of his answers, about how you don’t have to know an LGBTQ person to care about these issues,” Suffredini said. “And I thought that was really powerful for him to set the tone…that the floor for a group of candidates who have been working on these issues for a very long time is not to talk about the fact that they know people, but to relate to the community as fellow Americans, whether you know us or not. We’re human beings. We’re asking for very basic access and dignity.”